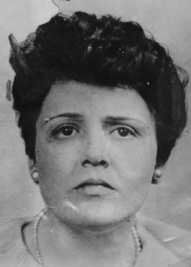 Nellie Tipton Muench
Today, we have been exposed to all sorts of "media circus" crime coverage, with names such as O.J. Simpson and Scott Peterson headlining the list of nefarious ne'er-do-wells, convicted or not. But in the 1930s, Americans were not yet desensitized to such celebrity criminals, and they were especially fascinated with the evil that dwelt in the heart of an attractive woman of St. Louis high society.

Thus, the Nellie Tipton Muench case riveted the nation during the 1930s "gangster era" and may have provided inspiration for the musical, "Chicago."

Nellie Tipton Muench was the wife of Dr. Ludwig O. Muench, a prominent, respected and even beloved St. Louis physician who also wound up going to jail as an accessory to Nellie's crimes.  Ludwig had achieved notoriety not only as a doctor, but as a virtuoso cellist.  Ludwig was apparently naive to the sociopathic nature of his wife and wound up playing the role of sympathetic dupe.

Nellie's father was a minister in Mexico, Mo., and her brother was a Missouri supreme court justice, who had been appointed by the notorious Tom Pendergast, boss of the Kansas City political machine.

Her father, William M. Tipton, had been a Confederate guerrilla under Col. John A. Poindexter, who achieved fame in central Missouri as the rebel responsible for robbing, and later tearing up a section of the North Missouri Railroad in 1861.  Poindexter's regiment fought in several early battles including Pea Ridge (Elkhorn Tavern), but the command was defeated and broken up by Gen. Odon Guitar in August 1862.  William M. Tipton was captured on Sept. 30, 1862, in Columbia, Mo., and was eventually transferred to the federal prison in Alton, Ill.  (See Documents)

To curry favor during the trial, Nellie obtained a newborn baby from an unwed Philadelphia servant girl named Anna Ware and claimed it as her own.  One judge involved in the baby stealing part of the case was none other than Rush H. Limbaugh Sr., grandfather of the famous conservative radio commentator.  Nellie and Ludwig were eventually found guilty of five counts of mail fraud.  Nellie received 10 years in federal prison and a $5,000 fine, and Ludwig received eight.  She was released from prison in April 1944, at which time Ludwig divorced her.  She changed her name and started a new life in Kansas City.

Kidnapping, Babies and Blackmail Never is a crime more sensational than when a member of the upper crust sinks low enough to commit it.

In this case, it all started in 1931, when Dr. Issac Dee Kelley was kidnapped after making a house call to a home on Davis Place in Clayton. He was released after eight days, but the culprit responsible for his temporary disappearance was unknown.

Three years later, tavern owner Adolph Fiedler gave the Post-Dispatch an exclusive story: he claimed the kidnapping was the work of ex-cons, gangsters and a woman he called Mrs. N. She was later identified as auburn-haired beauty Nellie Muench, a resident of Westminister Place and a prominent member of St. Louis society. She was the daughter of the Rev. William Tipton, sister to Judge Ernest Tipton, wife of Dr. Ludwig Muench and manager of a boutique in the Central West End called The Mitzi Shop.

Muench developed a habit of sending bills to widows for lingerie their late husbands may have (but probably hadn’t) purchased from her shop. Even though her track record was sullied with hints of jewelry theft and fraternization with gangsters, Muench’s affluent image kept her free of trouble for many years.

She was finally charged with the doctor’s kidnapping. Her trial had a change of venue to Mexico, Mo., a town near Columbia, Mo., where her father had his church, and Jefferson City, Mo., where her brother sat on the Missouri Supreme Court. Believing that the jury would not convict her if she was a new mother, she concocted a plan to get a baby to claim as her own. Working with her lawyer Vern Lacey, she located a baby in Chicago and brought him to St. Louis. That baby died and she found a second child, the son of Anna Ware, an unwed domestic servant in Pennsylvania who had come to St. Louis to deliver her child. Muench’s plan worked: she was acquitted of the kidnapping. At the same time, Nellie Muench also blackmailed one of her husband’s colleagues, Dr. Marsh Pitzman, claiming the baby was his. When Ware went to court to get her child back, Pitzman (who had been Muench’s lover) gave her $16,000 for her defense.

Nellie Muench was sentenced in 1936 to 10 years for mail fraud (for blackmailing Pitzman); her husband was sentenced to eight years, accomplices Wilfred (Skinny) Jones received 10 and Muench’s friend Helen Berroyer got five years.

​According to Karl Muench, the extensive negative publicity surrounding the case killed my Albert F. Muench's (my grandfather) St. Louis law practice and led him to join President Franklin Delano Roosevelt's "New Deal" as a government lawyer in Washington, D.C.

Photos from the St. Louis Post-Dispatch can be found at http://stltoday.mycapture.com/mycapture/folder.asp?event=986516&CategoryID=23105

*Editorial Disclaimer:  This story is presented because of its historical interest and the effect it had on Muench family relations at the time -- and for subsequent decades after the media tsunami caused by Nellie's crimes swept across the nation.  The subject became taboo amongst those generations connected to the time period because of the national shame brought by the episode, and it is reported to have caused a rift between different branches of the Muench family.

We present the facts here not to celebrate the life of a sociopath connected by marriage to our clan, but because we believe that frank openness and honesty are the best tools to heal deep-seated family wounds of the past, which at this point have lost their sting.  Like it or not, in the immortal words of Sister Sledge, "We are family."  Our family heritage is our heritage, both good and bad.

To deal with the past, we must embrace it warts and all.  After all, forgiveness can bring redemption.  For instance, Friedrich Muench forgave Anna Liehr Nagel and helped her forge a new life in the wilderness of Missouri after his father, Georg Muench the Elder, had preached against her profligate ways back home in Germany.

And, as Abraham Lincoln once said, "Truth is generally the best vindication against slander."

**Having taught at both these institutions, I shall provide no comment regarding each school's ability to train students for such nefarious work. (Just Kidding!) --JFM