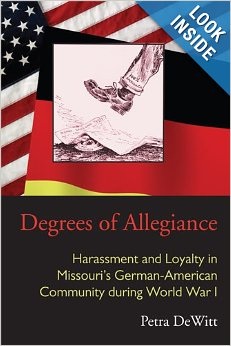 Historians have long argued that the Great War eradicated German culture from American soil. Degrees of Allegiance examines the experiences of German-Americans living in Missouri during the First World War, evaluating the personal relationships at the local level that shaped their lives and the way that they were affected by national war effort guidelines.

Degrees of Allegiance updates traditional thinking about the German-American experience during the Great War, taking into account not just the war years but also the history of German settlement and the war’s impact on German-American culture.

The book is available from the Ohio University Press, http://www.ohioswallow.com/book/Degrees+of+Allegiance or Amazon.com, http://www.amazon.com/Degrees-Allegiance-Harassment-Missouris-German-American/dp/0821420038/ref=la_B006T9XYNG_1_1?s=books&ie=UTF8&qid=1382636566&sr=1-1.